In Memory of Mr. Hockey 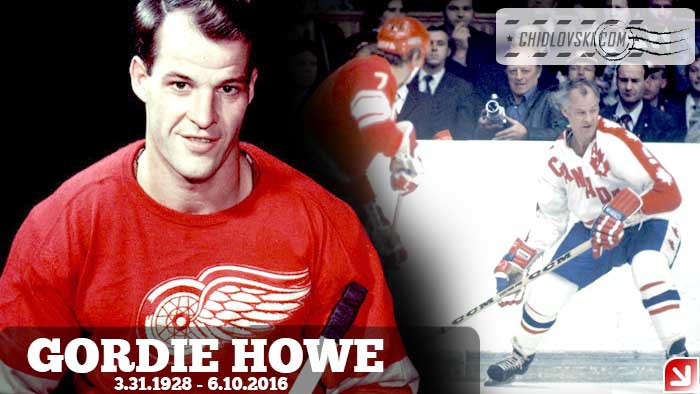 Hockey fans always come up with various all time top lists for hockey legends. The names on the lists are always different depending of the time they are being compiled, on personal preferences, country of origin and thousands of other things that can affect our choices. One thing remains the same – Gordie Howe is always on the top of the list. And he will always be there – in all these lists and in the hearts of hockey fans of the world.

Do you remember when was the first time you saw Gordie Howe play hockey?

If you ask me, it was in 1974. I was a kid in Moscow, Russia and Gordie Howe played for Team Canada in the 1974 Summit Series in Canada and Russia.

All broadcasters and sports writers were writing about Gordiie Howe, the greatest hockey player ever. We lived behind the Iron Curtain and all this hype about North American super stars was new to us. We thought that Russian players were the best in the world and knew very little about the NHL, Gordie Howe, Bobby Orr, Bobby Hull… I still vividly remember the excitement of watching and saying loud the names of Canadian players.

Wow. There was something wild and huge in the way it sounded. And in the way people in Canada on TV broadcast  reacted when Gordie Howe was being introduced before the game. It was an earthquake of joy and emotions. Totally fun and crazy!

He was 46 and seemed ancient to step on the ice to play on that level by Russian standards. Hey, he was older than my father who left sports 10 years ago or so! In addition, Gordie Howe played with his sons Mark and Marty. And all TV cameras were pointing at Mr. Hockey.

And it was great! He was ageless! He was a super warrior and leader of Team Canada.

I watched many games and tournaments afterwards. I saw many players and team playing big on the ice.

But it was these moments from the past that stays forever in my memories. The moments when I first time saw Gordie Howe and super stars from Team Canada playing vs. Team CCCP in 1970s were magic and unforgettable.

These moments have no expiration day.

Thank you, Mr. Hockey, for these moments that you gave us to remember!