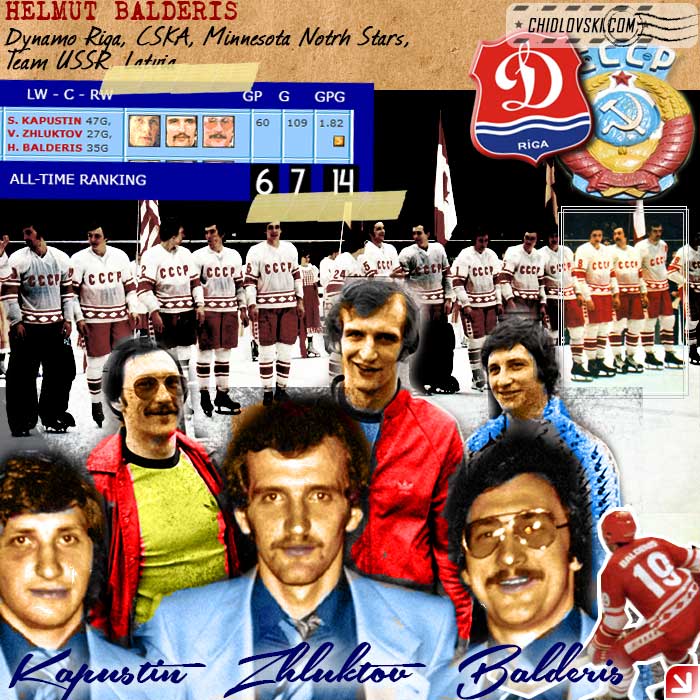 Hockey is played by teams. Forwards play on lines. One of the most memorable lines that played for Team CCCP was the line of Sergey Kapustin (LW), Victor Zhluktov (C) and Helmut Balderis (RW).

The footage below shows a post game handshaking with Sweden at the Izvestia Cup back in 1976. This one of the earliest installation of these players together.

Overall, it was one of the most promising lines at the time. It was intended to replace the famous Petrov’s line which was almost perfect but showing signs of aging by the end of the 1970s.

The chemistry between the linemates clicked almost instant.

The uncommon side of the line was that all three played for different teams. Zhluktov played center in the Red Army, Balderis – in Riga and Kapustin in the Soviet Wings in Moscow. It didn’t really fit the unwritten rule of the Soviet hockey – most of the linemates were supposed to play together on the club level all year long. Not just at the World Championships or Winter Olympics.

So, when Victor Tikhonov was transferred from Riga to Moscow and appointed the head coach of Team USSR and the Red Army, Balderis and Kapustin accompanied him to the CSKA and national team. Needless to say, neither of them really wanted to be transferred to play for the Red Army.

It was a peculiar situation. There was no issues between the linemates. The got along really well but the fact that both wingers was forced to play for the Red Army really bothered them. In many ways, it was like an “arrainged marriage”. No one really asked them if they want to move to the team they didn’t chose.

On the national team, the line played 60 games and scored 109 goals. That ranks the Kapustin=Zhluktov-Balderis line as No. 6 in games played and No. 7 in scoring in all-time history of the Soviet national team.