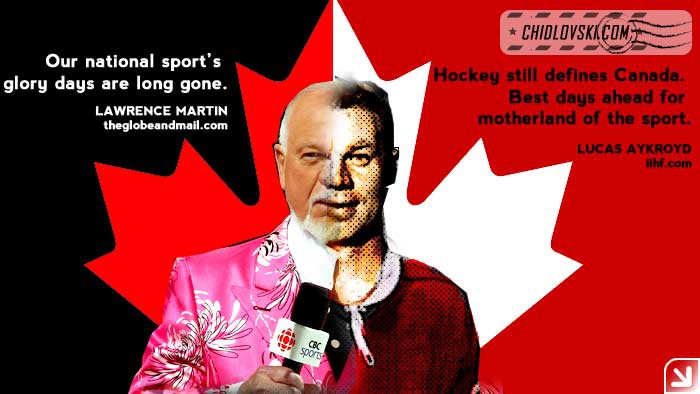 One of the interesting topics to read about this week was two distinctly opposite points of view on Canada and hockey as the sport defining the nation.

Both views were published by Canadian authors. Both wrote about hockey and no strangers to talk about the subject matter.

“The glory days of our national sport are long behind us”, wrote Lawrence Martin in his  ‘We the North’: How Canada’s preoccupation with hockey has changed article for The Globe and Mail. “The 20th century belonged to hockey. The 21st won’t. In that the game is no longer needed as an identity builder, we’ll survive its decline.”

Lucas Aykroyd replies in his article for the IIHF with the opposite view:

“Hockey still defines Canada. Best days ahead for motherland of the sport.”

Both authors are true experts on hockey.

I always like to read international hockey articles by Lucas Aykroyd.  He knows the topic. He is a proud Canadian and, at the same time, very open for new trends in world hockey. Good stuff for a good read!

For me not being a Canadian, it’s always been interesting what’s happening in the back stage of hockey nation. In this case, with a big pleasure I’d refer to the original articles without taking sides. Lets leave the topic to the authors. There are no rights or wrongs regarding the matter. It’s just two distinct POVs with well taken points.

On a personal note, Canada might loose or win here and there. Hockey role  might be less dominating in Canada, Still, it is Canada who sets trends in the game, set the record straight on the game essentials, sets an example of hockey appreciation for fans and experts.

Hockey might no longer define Canadian society as in the previous decades but, like it or not,  it is Canada who still defines the game on and off the ice.

For that I am always grateful to the hockey nation! Go Canada! 🙂