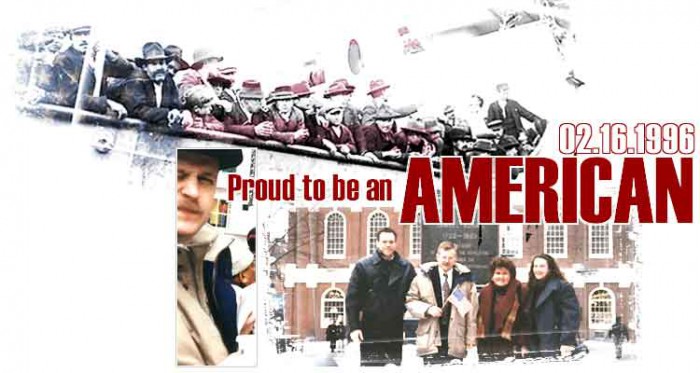 Yaho-o-o-o-0, there were about 200 people at the ceremony in the Faneuil Hall in Boston on February 16, 1996 and I bet all had a great time celebrating their 20th Anniversary this February.

Congrats to all and myself!

The lady in the office congratulated me with passing the citizenship exams and shook my hand.

“Now, Mr. Chidlovski, congrats. It’s a big day in your life…  Would you like to change your name?”

“Really. Can I change both first and last name?”

“Certainly. Anything you want to.”

“Write me down as Benjamin Franklin.”

She smiles. She has a sense of humor.

20 years passed. For whatever it is worth, I am still Arthur Chidlovski.

In a few weeks after the ceremony in the Faneuil Hall, I received a letter from the White House in Washington, DC that stated in the end:

“Hillary and I welcome you as a new citizen and extend our best wishes for much happiness in the future.”

The letter was signed Bill Clinton.