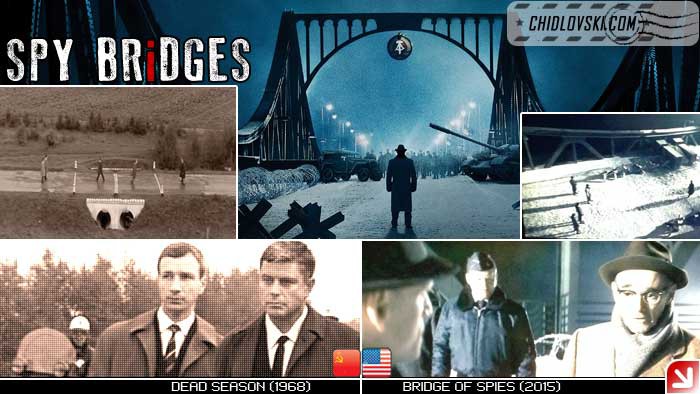 Sometimes the weather and films are in mismatch.

Last night was perfect. We got a heavy snow storm and a great film to watch. The Bridges of Spies (2015) is a case of a perfect match between great work by director, writers, actors and cinematography overall.

Directed by Steven Spielberg, written by Coen brothers and Matt Charman, starring Tom Hanks and Mark Rylance, the film is pre-determined to be good.

Oh, well, there are plenty of cases when big names input doesn’t give a big film output. There are also times when both critically acclaimed and box office hits don’t really earn high score on my watch list. Not this time.

The cover graphics by Chidlovski Blog Chidlovski for this post is a reflection on two spy movies depicting spy exchange taking place on the famous Glienicke Bridge in Potsdam.   One of them is a Soviet spy classics, the “Dead Season” (“Mertvy Sezon”) from 1968, and the other one is soon to become a classics of this genre, the “Bridges of Spies”  from 2015.

The climax of both films is in the exchange of spies taken on the bridge separating the East and the West, us and them, two big rivals in the middle of Cold War.

The bridge in the Soviet flick looks almost comical today. It doesn’t even look like the bridge in Berlin. Just a section of a highway going over a little brook in the field.

The new film pictures a real place looking cold and dramatic. Almost as it was back then.  Obviously, the price tags for both films are no comparison.

The drama and the heaviness of tension in the air.

The fear and hatred of the time.

The adrenaline running during the scene.

The mystery, suspense and danger of spy games.

The spy thrillers are coming back. It’s a great genre. Hope it stays only on the screens in historical dramas.