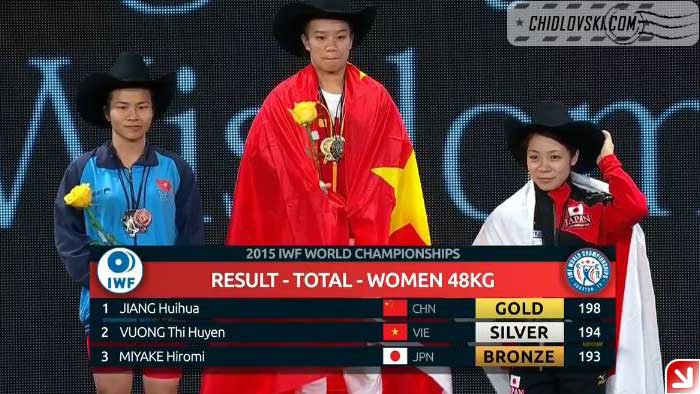 Very much like for 56KG class, women’s medal stand for 48KG was represented by Asian countries.

It was fun to watch this competition and to see familiar faces in the training hall and on the competition platform.

Of course, as a historian of Olympic weightlifting, I was following Hiromi Miyake, the daughter Yoshiyuki Miyake and niece of Yoshinobu Miyake. Brothers Miyake are legends of Olympic weightlifting and it’s interesting to see how their legacy is being carried now by Hiromi who just turned 30 and has a silver medal at 2012 Olympics in London.

Last night, Hiromi won silver in the snatch lift and a bronze medal in total. Hiromi had a solid perormance lifting 4 of 6 attempts and securing the third place. Observing the chemistry between Hiromi Miyake and her coach and father Yoshiyuki Miyake was priceless. Congrats to Miyake’s dynasty with another superb performance in Olympic weightlifting.