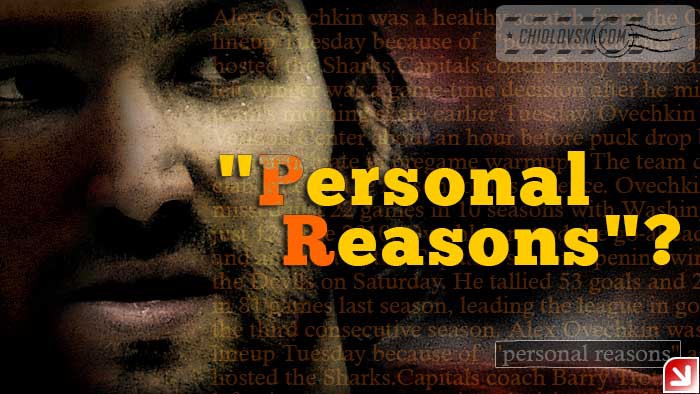 What are these “personal reasons” behind Alex Ovechkin’s absence in the Washington vs. Sharks game last night?

Rules are rules for everybody 🙂

Alex Ovechkin missed Tuesday’s morning skate because he overslept after setting his alarm for 8:30 p.m. instead of 8:30 a.m. In accordance with team rules, Ovechkin was scratched for that night’s game against the San Jose Sharks.

Ovechkin said he arrived to Kettler Capitals Iceplex late, and that’s when Coach Barry Trotz told him he wouldn’t play in the game.

“I made mistakes, so that’s why,” Ovechkin said.

Ovechkin was back at practice on Wednesday, when he addressed his unexpected absence. Trotz had said he missed the morning skate and then the game — a 5-0 loss to the Sharks — because of “personal reasons.” Trotz said Ovechkin is expected to play on Thursday against the Blackhawks.

“We tried to not make a big deal of it yesterday because it was a game day,” Trotz said.

Ovechkin compiled 53 goals and 28 assists last season, and Tuesday was the 23rd game he’s missed in his NHL career. He has 476 goals, including the go-ahead score in the Capitals’ season-opening 5-3 win against the New Jersey Devils.