What Did Bobby Clarke Say To Pat Stapleton in Kremlin? 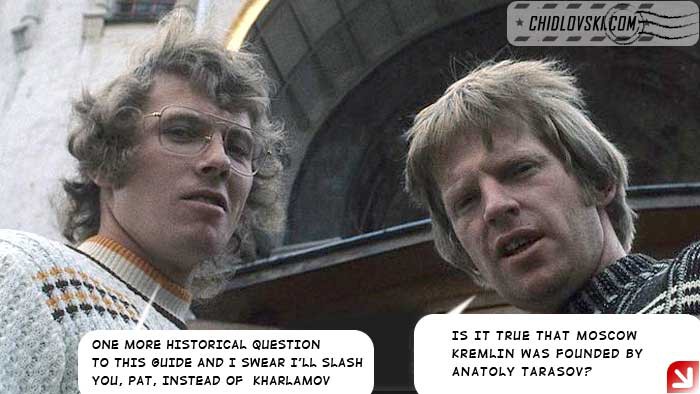 Actually, I am not sure about the answer…

This photo was taken by Melchior DiGiacomo, famous sports photographer of the time. Bobby Clarke and Pat Stapleton with Team Canada on the tour to Kremlin in Moscow.

It’s an interesting catch to get these two together. To me, they are totally opposite in everything. Not just that Clarke played center and Stapleton – defense. Not that one played in Philadelphia and the other one in Chicago… They just seemed to follow different philosophy of hockey.

Action driven Bobby Clarke. Anything can be done to win. A-N-Y-T-H-I-N-G.

The slash episode when Clarke deliberately injured Valery Kharlamov remains one of the controversies of the Series. Not that much for the Soviets. To them it was part of the game, “stuff happens”, “what else would you expect from Canadians?”. It was rather a dividing point among Team Canada players. Is it really A-N-Y-T-H-I-N-G that we can do to win?

Pat Stapleton is an interesting character. His insight into the game is very deep. If you ask Northern Americans who saw the Summit in 1972 about the best players among the Team USSR, my bet it would be Yakushev, Tretiak, Kharlamov. The order might be different, but it will be these three names.

Here is what Pat Stapleton says to Roy MacSkimming for the “Cold War”:

Was the legendary Valery Kharlamov the toughest Soviet forward to defend against? “Not necessarily.”
What about Alexander Yakushev? “He came down along my side a lot. They’d criss-cross.”
Which others does he remember best? “[Vladimir] Petrov was a pretty good one. [Boris] Mikhailov was a rugged competitor, he liked to get physical in the corners. And number ten, who was that? Oh yeah, [Alexander] Maltsev. He was a smooth athlete, very smooth stride, he moved the puck well.”
Pat Stapleton, Team Canada 1972

Happy 43rd Anniversary of the 1972 Summit Series to all! Enjoy the September to Remember!