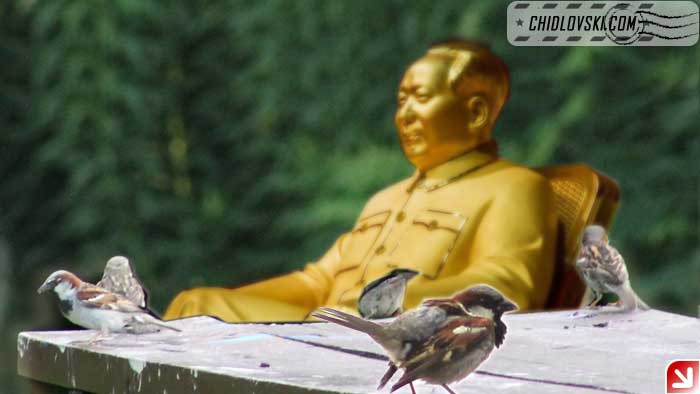 What would Chairman Mao say to American Sparrows today in the Belle Isle Marshes?

Of course, it’s a hypothetical question. Chairman Mao is dead. So are millions of sparrows killed in China during the Great Sparrow Campaign back in the late 1950s.

Those were the actions of the Great Leap Forward (1958-1962) when four pests were declared most wanted and were to be eliminated – rats, flies, mosquitos and sparrows. The whole thing was initiated by Mao Zedong. Mostly known as Mao.

Sparrows got on this kill list because they ate grain seeds and damaged the harvest of people.

Millions Chinese were called to exterminate the sparrows. They were marching in the fields banging on pots and pans, beating drums to scare the little birds to land. Sparrows had to fly until they fell down on the ground. Their nests were destroyed. Their eggs were broken. Sparrows were near extinction in communist China.

Rewards and recognition were given to enthusiastic crowds in accordance with the volume of birds they had killed.

As a result, ecological balance was upset. and enabled crop-eating insects to proliferate. With no sparrows to eat them, locust populations quadrupled, swarming the country and compounding the ecological problems. At least 20 million people died of starvation.

This is an old true story. Happy little Amrican sparrows probably never knew of it. But, Chairman Mao remembered everything.

Just curious – what would he say to the sparrows had he sat next to them at the table in the Belle Isle Marshes?