The First Bruins From the USSR 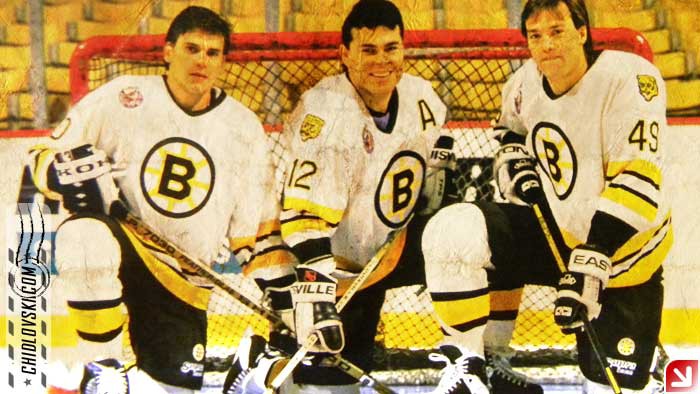 That was the Boston Bruins’ first line during my first season of following the NHL games in Boston.

Oates played center and was one of the best playmakers in the world at the time. He was traded from St. Louis where he had a magic chemistry with Brett Hull. Joe Juneau was a solid winger. He was one of the rare NHL players who besides playing hockey managed to graduate from college and had a degree in aeronautical engineering. Dmitry Kvartalnov played RW on this short-lived but promising line.

After the downfall of the Soviet Union, more and more Russian players signed their contracts with the NHL teams. Boston was one of the last NHL teams to utilize “made in the USSR” talent on their roster.

It was Dmitry Kvartalnov who happened to be the first Soviet hockey graduate to play for the Boston Bruins.He was 16th overall on the 1992 NHL draft.

Kvartalnov was born and began to play hockey in Voskresensk, Russia. It was a hockey town famous for its Khimik team of the Soviet Premiere League. The team was run by Nikolay Epstein and had such world famous players that were prepared there as Igor Larionov, Slava Kozlov, Valery Kamensky, Alexander Ragulin, Yury Lyapkin and many more. Kavartalnov was one of the young prospects of the team. He played five seasons for the Khimik Voskresensk and 40 games for the national team USSR.

Like many other Soviet players, Kvartalnov went overseas trying to take his chances in the NHL. According to Kvartalnov, it was a total gambling when he and Valery Zelepukin flew to the North America to pursue NHL career. Instead of the NHL, he ended up playing with the San Diego Gulls in the IHL.

Finally, he was able to sign a contract with the Bruins in 1992 and had a very promising beginning of the NHL career. He was assigned to play on the first line. His rookie stats were impressive – hee scored at least a point in his first 14 NHL games, which stood as the NHL record for longest point streak for the rookie till Yevgeny Malkin broke it in 2007.

Kvartalnov says about his rookie season in the NHL:

I will never forget my days in the NHL. It’s not for everybody to play there. I think my skills fit the North American standards. It was very nice to play with Joe Juneau and one of the best NHL centers Adam Oates. In my first year, I scored 30 goals and was #4 in the Bruins. For some time, I even competed with Eric Lindros for the Best Rookie.

His second season wasn’t that impressive. According to many sources, Kvartalnov didn’t get along with Brian Sutter, the Bruins head coach. In all probability, it wasn’t a personal conflict. Kvartalnov was a fast and high-scoring winger who didn’t like to play a 2-way game of the Bruins. Highly skilled offensively, he was underachieving defensively.

It was rather an emotional issue for Kvartalnov and he left the Bruins to play in Europe. Today, after 25 years as a player and being a coach in the KHL in Russia, Dmitry accepts his mistakes in the past:

The coach is always right. I should have listened to Brian and should have kept better relationship with him. I decided to go to Europe and regretted about it afterwards. I just shut the door to play in the NHL for myself. 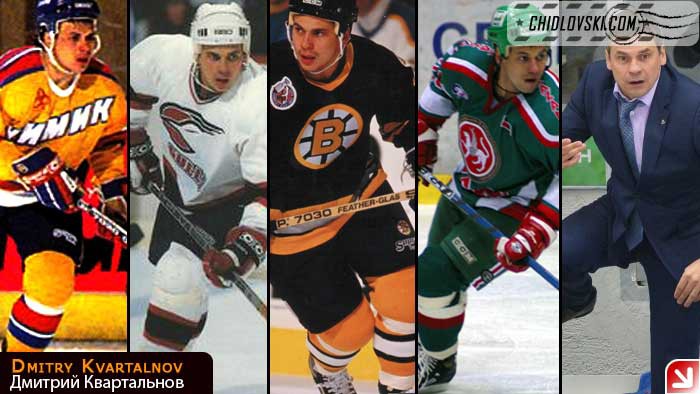